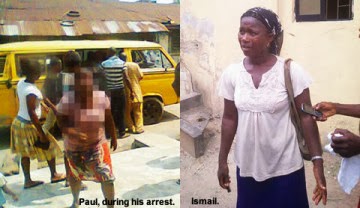 Paul, a driver who was accused of being a kidnapper and ritual killer by a woman in his area, was on Monday, arraigned before a Somolu Magistrate’s Court on two counts of kidnapping and stealing.

It was earlier reported that Tope Ismail, a resident of Anuoluwapo Street Somolu had on Saturday, accosted Paul while he was washing his car outside his home at Sodeke Street, Somolu.

Ismail reportedly raised the alarm and told neighbours that Paul was the driver of a commercial bus that had on January 21, 2014, kidnapped her and about 10 others. The bus, said to have been headed for Yaba, allegedly took a detour to an unknown destination after its occupants became unconscious after boarding the bus.

She allegedly regained consciousness when her captors touched her with an object. Ismail was taken away from the scene soon after; she was the only passenger in the bus who reportedly regained her freedom.

The Onipanu Police Division was alerted by the community development association chairman when it became apparent that Ismail was not ready to let Paul go.

It was learnt that some residents who were upset that the police failed to investigate Ismail’s claims of ritual killing before taking Paul to court, alerted the Office of the Public Defender. Two lawyers later arrived from the OPD to take matters up on Ismail’s behalf.

A closed door meeting between the Magistrate, Mrs. B.O. Osunsanmi, Paul’s lawyer, the police prosecutor, ASP Adegoke, and the OPD lawyers was held after the lawyers from the OPD had earlier met with Adegoke over the issue. The meeting took place before the court sitting.

When the court finally began its proceedings, Osunsanmi directed Ismail to go back to the Onipanu Police Division and give her statement; the police had only taken statements from Paul.

She adjourned the case to Feburary 6, 2014, to enable the police bring the proper charge before the court.

She ruled that Paul should be remanded at Ikoyi prison.

The wave of RAPE in the Society is alarming, sad, unfortunate & a total disaster to say the least. It yells out daily for greater punishments against RAPISTS.

Our girls(irrespective of their age) are no more safe in the hands of their fathers, neighbours, tutors and even spiritual leaders......

Let us together sensitize NIGERIANS on this moral decay and the need for us to start living right. We should share LOVE......not PAIN........
STAND UP TO RAPE TODAY - #SAYNOTORAPE